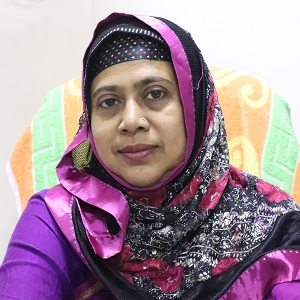 To be a window of modern age through research, innovative works and establishing new dimension between textile and chemistry.

Among the four departments under the Faculty of Science and Engineering, the department of Chemistry is one of the promising departments’ of Textile University. Chemistry is the central science of innovation, information, technology and development. The department of chemistry acts as a base for all engineering department of BUTEX. It is a highly specialized branch in the areas of dyeing and finishing chemistry, fiber and polymer chemistry, and a newer area that intersects with materials science and effluent treatments of textile waste water. The research is on doing things better (quicker, cheaper) and with a lower adverse environmental impact than offered by conventional technology to improve textile handle, water repellency and laundering properties. Undergraduate and graduate laboratories of the department are soon going to be enriched under the project.
The department also focuses on providing masters degree on chemistry to create opportunity of higher education and research in growing need of textile, textile effluents and garments industry.